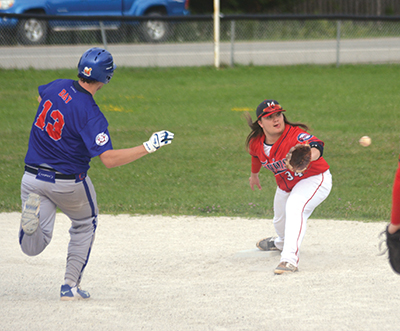 The Mansfield Junior Cubs are maintaining first place in the NDBL after an 11-1 win over the Midland Twins on Saturday, July 21.

The second place Ivy Blues are two points behind and the final week of the regular season schedule could see either team finish the season in the top spot.

Wednesday's game in Mansfield started with the Twins behind the eight-ball before the game even started when they showed up with a short bench and played the game with two outfielders.

The Twins opened the scoring in the first inning and that was matched by a second inning run from the Cubs.

From there, the Mansfield team started hitting and kept scoring for the rest of the game.

The third inning started with a hit to right field by Jamie Crain that brought in a run.

The Cubs were leading by three when Scott Pendleton hit to centre field.

Going into the fourth inning the the Cubs loaded the bases on a double. From there they got the bats moving with a hit from Jake Currie that brought in two runs.

Four more runs in the fifth inning gave the Cubs a seven run lead. They finished off with three more to end the game.

“We tried to be more strategic in where we placed the ball,” said Cubs shortstop Scott Pendleton of the short-man situation with only two Twins outfielders. “On offence we were pretty good. On defence we were pretty strong. We were more of team tonight – playing together.”

Going into the final week of the regular season, the Cubs are in first place in the Junior division of the North Dufferin Baseball League with 19 wins and two losses.

The Ivy Blues are right behind with an 18-3 record.

The final couple of games will determine who will take the top spot in the League before heading into playoffs.

Either way the Cubs are in great position to enter the first round and have produced solid results all season long.