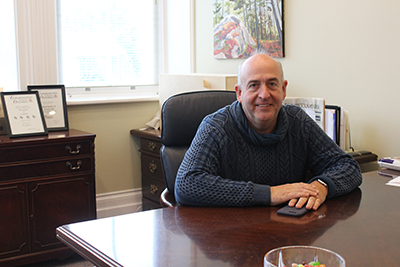 One of Orangeville's worst-kept secrets is finally out in the open, with  Mayor Jeremy Williams having filed his papers seeking re-election in October's municipal election.

Coming to the end of his inaugural four-year term in the town's big seat, Mayor Williams noted it was “an easy decision” to put his name forth for consideration. In 2014, he defeated incumbent Rob Adams following a bitter campaign. With two competitors this time around – local realtor Sandy Brown and behavioural therapist Darrin Davidson – it's shaping up to be an interesting couple of months before the Oct. 22 vote.

Sitting down with the Citizen this week, Mayor Williams looked back on these past four years with fondness. While he recognizes that the atmosphere at town hall hasn't always been the best, the mayor pointed to several “important” issues this council has tackled head-on during this term.

“If you were to ask me what I'm most proud of over the past four years, I'd probably say getting our Orangeville Police Service (OPS) back on track,” Mayor Williams said. “If we go back in time to when I first started out as mayor in 2014, there was a lot of dysfunction surrounding OPS. We had a board that was butting heads with the police officer association, the budget was spiralling out of control. People were generally extremely unhappy with the level of service and the level of cost. Very quickly, I settled all of that down.”

Mayor Williams said, in his role as chair of the Orangeville Police Services Board (OPSB), that he repaired the relationship between the police association and the OPSB and worked with the, at the time, new local Police Chief Wayne Kalinski to convey the importance of tightening the service's annual budget.

“We now have a strong, viable service that is economical. I'm very proud of that,” Mayor Williams said.

Also this term, council had chipped away at what our mayor described as “decades' worth” of accumulated deficits that he says was previously ignored, to the point that, today, it is completely paid off. They have also ended the practice of dipping into municipal reserves to pay for big projects, instead focusing on boosting the Town's coffers.

Perhaps this council's biggest accomplishment over the past four years, the mayor says, has been establishing a five-year plan.

“That was huge for us. It's allowed us to take the budget away from the craziness it was. It used to take us months and months to hammer out our budget. With this new five-year plan (introduced in 2017), we have gotten away from that,” Mayor Williams said. “We're now able to project five years ahead, look at what the needs of the municipality are, how much money we're going to need to complete those projects and plan accordingly. We can do great things now because of this.”

Boasting a healthy laundry list of checked-off items from this term, which also includes long-awaited renovations to the municipality's sewage treatment plant, Mayor Williams stated now was not the time to rest on any laurels.

It is expected there will be a heavy turnover on Council, with incumbents Gail Campbell and Sylvia Bradley having announced their retirement and Deputy Mayor Warren Maycock and Coun. Scott Wilson still quiet ahead of tomorrow's nomination deadline.

As such, Mayor Williams has called on this next council to push on and create a legacy of its own.

What that legacy will be, Mayor Williams could not possibly speculate. However, as one of seven potential voices on this next council, he certainly has some ideas.

“I think transformative is probably the best way to describe my platform,” Mayor Williams said.

He continued, “If you look at any industry, I don't care what, we have seen huge innovations in technology. Artificial intelligence, robotics, computerization, streamlining… These things have been used and implemented everywhere, except for one very big outlier, and that's government. In government, we're still filing our papers away in over-stacked cabinets, doing the same old things that have been done for hundreds of years. If I get a good, solid team of council members, I want to tackle that.”

Mayor Williams assured the Citizen that any move to further embrace 21st century technology would not result in a direct loss of jobs.

“I don't want to fire anyone. I don't want to close anything down. I don't think we have to do that. People retire, that's fine. People move away, that's fine. I'd like to see us implement an immediate hiring freeze, though. We don't need more people, we need better solutions, better ways of doing things so that we can operate more effectively and more efficiently.”

According to the Town's website, the municipality boasts 180 full-time members of staff, employs another 180 part-time workers and brings on a group of roughly 100 seasonal workers every year.

Something he tried to introduce a couple of years ago ahead of the town's Canada 150 celebrations was the idea of a central park in Orangeville. Such a move would, Mayor Williams said, involve enlarging Alexandra Park, located at Second Street and First Avenue. He would like to see the three-quarter acre plot grow “so that the town has a proper downtown park for things like farmer's markets, big events and for people to just hang out and enjoy themselves.”

Seeking to clear up something that has been used against him this term, Mayor Williams wanted to talk taxes. Ahead of the 2014 election, he promised local residents there would a zero percent tax increase during his first year. In the end, Council implemented a 2.4 percent increase to the tax levy. Still, the mayor maintains that amounted to a “true” zero percent tax increase once assessment and inflation had been taken into account.

“If you go back to my campaign material, I was very clear in that I said, in that first year, I would not support any budget that was beyond a zero percent increase. That quickly got misinterpreted to there would be absolutely no increase, which is something you just cannot have,” Mayor Williams said. “You have to account for assessment and you have to account for inflation when you're dealing with taxes and the budget. If you don't, then you don't understand how economics works.”

Mayor Williams went on record to make a similar promise to the one four years ago, saying he would not support any future budget above and beyond a zero percent increase, once inflation and assessment has been taken into account.

“I do not believe we need more money in our budget. It's large enough to look after this town adequately at today's dollar. I don't want to see if grow at all,” Mayor Williams said. “Taxes could be lower, but they could be higher too. If I could have a full say on the budget, it would be lower than it is right now. There are places we can tighten.”

When asked why voters should give him another four-year run, he pointed to his track record and said simply he doesn't believe there's a better candidate for the job.

“I have proven myself to be the most approachable mayor on the planet, and that is not going to change. I am going to be there for the people 24/7, like I have been for the past four years,” Mayor Williams said. “There are likely two other people running against me. I find their platform not worthy of supporting. Should the public see fit to vote me in for another term they know they're getting a hard-working individual who truly does put the community first.”