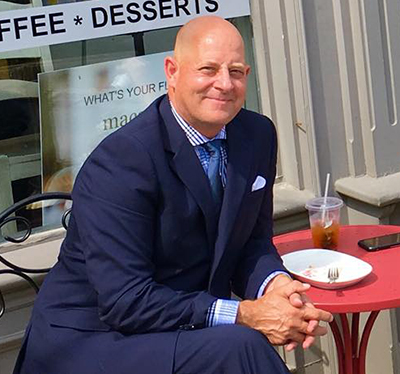 Darrin Davidson wants to make a difference in Orangeville.

The local behavioural therapist confirmed this week that he had succeeded in overturning a ruling that he could not run in October's municipal election. As such, he now plans to submit his paperwork ahead of tomorrow's 2 p.m. deadline to make Orangeville's mayoral contest a three-horse race.

A big personality with some big ideas, Mr. Davidson is hoping his third run for political office is a successful one. He ran for a position on council in both 2010 and 2014, missing out on a seat on both occasions. Having taken the past four years to dust himself down, Darrin says it's the encouragement he's received from local residents that has made him step up and attempt another run for municipal office. Now, he just hopes the rest of the community buys in.

“I have a real vision for what this town can be, and I know a lot of people have a similar vision. There are people who perhaps don't have a vision looking for someone to make things happen. I'm the guy to do that. This is my third time now running for council. This isn't about a business card for me. I want people to get to know me, this is who I am and this is what I do. I'm a community guy who cares about the direction we're going in,” Mr. Davidson told the Citizen in an interview.

While most people like to steer away from the word ‘politician', Darrin hopes to embrace it, saying he wants to show the community what a “real” politician is all about. Preferring not to enter into a mud-slinging competition with his fellow candidates, he opened up when discussing his platform.

“I can't wait to be mayor so that I can lead a group of gentlemen and ladies in a way befitting of a community like Orangeville. We're going to add value to being a resident in Orangeville,” Mr. Davidson said. “We all love our town, but there's nothing wrong with saying we can do more. We know we can do more. We have some of the worst efficiencies in this province. Our tax dollar value is one of the worst in Ontario.”

While he didn't give specific details regarding how he plans to turn that trend around, he stated boosting economic development in Orangeville is the be-all, end-all of his plan.

“Everything centres around economic development, I say that with big capitals and bold letters. How are we going to drive value in this town? For the best part of a decade the focus has been on building new houses, we know where that has gotten us,” Mr. Davidson said. “Even though that provided a great amount of new tax dollar revenue for the town, it hasn't really changed much. I want us to be more dynamic, more ambitious, a better community.”

He wants to create a system that will encourage more businesses to set up shop in Orangeville.

While you would think something like that would go hand in hand with the promise of more job opportunities in the community, Mr. Davidson stopped short of making such a promise. In fact, he said he wouldn't make any “outlandish” pledges ahead of the Oct. 22 vote, saying residents should not believe any politician who makes “big, bold promises.”

“Anyone who says they will lower taxes without telling you how, is lying. I don't think you can make those promises. You've just got to do it. Then, in the future, you can point and say ‘look what I did back then',” Mr. Davidson said

One thing he hopes to accomplish as mayor is doing what he can at Council to help make Orangeville Canada's lacrosse capital. With hugely successful programs from the junior level all the way down to tykes, Mr. Davidson believes the community has everything in place to be recognized as the national leader when it comes to Canada's national sport.

He has embraced the idea of developing a central park in Orangeville. While he didn't disclose details regarding placement of the potential park, Darrin feels it's vitally important to create a space in town that can be enjoyed by people of all ages. He wants to transform the community's biking and trail systems, while he also plans to meet with Credit Valley Conservation to see what plans the organization has to develop its Island Lake Conservation Area.

A lot of these ideas, should they be implemented, would come at a considerable cost to the taxpayer. Mr. Davidson has identified one key area where, he believes, the municipality can save a significant sum of money each and every year.

“I was the first person in this community to challenge policing more than six years ago. It's not about the cops, it's about the policy. It's about the money we're spending,” Mr. Davidson said. “I'm not afraid to say that $4.6 million is available to us if we switch to the OPP. There are people who say they don't believe the numbers, I say BS. I will take the lead on that initiative and drive the discussion around rationality if I'm elected.”

He added, “You might hate the fact that we lose our OPS, I get that. But let me talk to you about the value we will get out of that $4.6 million.”

Darrin says he will act as a shield for this community if they decide he is the right man to lead the town forward. He believes he has the skills, ideas and experience to make a difference in Orangeville.

“I will be everything this community is looking for. I'm authentic, I'm passionate, I'm genuine. I stand in front of the issues. I'll take on all the burden – the taxes, the debt, the homelessness, the drugs. If you want to be mayor, there's no excuses and I won't make a single one,” Mr. Davidson said. “You can fake your way through this and get some things done, or you can actually give it your all. Why should people vote for Darrin? Because I'll get the job done, no matter what it is.