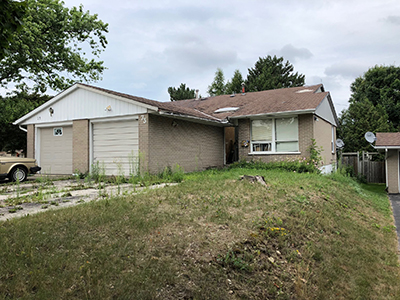 Two of the three men vying for the mayor's seat in Orangeville took to social media this week as the mudslinging ahead of October's municipal election began.

Mayoral candidate Sandy Brown, an Orangeville realtor, put up a post on Facebook on Tuesday (July 24) condemning Mayor Jeremy Williams, who is seeking re-election, for what he described as the “disgusting” condition of the Marion Street property Mayor Williams used as his address when filing his nomination papers at town hall.

The semi-detached bungalow is seen to be in poor condition, with significant damage to the roof, front window and front door. The driveway of the property is overgrown with weeds, while pictures Mr. Brown posted showed the backyard as also overgrown.

“This house has been abandoned and neglected for many months, according to neighbours,” Mr. Brown wrote. “The utter lack of respect for immediate neighbours and the entire street is appalling. Two weekends ago Mayor Williams was shepherding the Communities in Bloom judges around town. I'm guessing he missed this beauty.”

Mayor Williams took the bait, so to speak, firing back at Mr. Brown for what he called a “warped and contemptuous” attack.

“I own lots of property. Many are beautiful. Some are rented to others that I have little control over. Some are being redeveloped to sell or to rent. That someone would stoop so low as to attack me in such a warped and contemptuous way is disgusting,” Mayor Williams retorted. “Shame on a candidate that is so totally bereft of positive ideas that this is the best he can do.”

“I make myself uber-available to everyone pretty much all the time. Despite that I still get people walking into my backyard, approaching me on my driveway and knocking on my door unannounced,” Mayor Williams wrote. “I'm not okay with sharing, online, where I live to the world. My friends know where I live, that's good enough. If it was just me I might not care, but my family has a right to privacy and security.”

In what came across as a retaliatory shot, Mayor Williams noted Mr. Brown was going to be the listing agent for the property after the tenants were evicted and the property cleaned up, but “I fired him as he's not the best real estate agent. I have a much better agent now thankfully.”

In a second post put up on Wednesday, Mr. Brown refuted those comments regarding being fired, stating the only job he had done for the mayor had gone well, closing in just 35 days, something Mr. Brown says is “pretty quick in real estate terms”. He called Mayor Williams a bully and said while many in the community have told him to take the high road and not engage in dirty campaigning, he felt mudslinging was inevitable.

“Based on the way that Williams conducts himself on social media, with Orangeville Town Council, with Dufferin County Council and with town staff, this was going to get ugly at some point,” Mr. Brown wrote. “I don't typically get into conflicts. In fact, I would prefer to steer clear usually. But, when it comes to bullies and liars, I'm going to be in your face every time.”

The municipal election will take place on Oct. 22. So far there are three names in the running for the mayor position, with local behavioural therapist Darrin Davidson expected to file his nomination papers before tomorrow's 2 p.m. deadline.