Anglers reel them in at Island Lake Fishing Derby 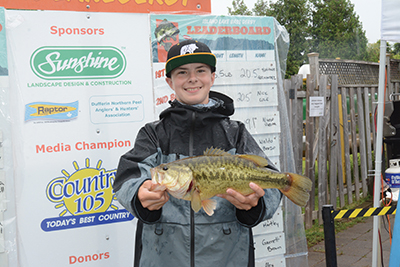 It was cloudy and dull during the first day of the Island Lake Bass Derby on Saturday, July 14, and that just may have contributed to a lot more fish being reeled in by anglers hoping to land a big one.

Bass typically don't bite a lot when it's bright and sunny and with overcast skies it didn't take long for anglers to start bringing in their catch to be measured and weighed.

The Derby, now in its tenth year, is hosted by The Friends of Island Lake and Credit Valley Conservation and has some good prizes for the biggest catch so there was a lot of serious sportsman casting lines from both the shore and many boats around the lake.

Competition started at 7:00 a.m and the first catch was already being sized within the hour.

“We have around 220 people registered today,” said organizer Jacob Pries of the Credit Valley Conservation Foundation. “On a day like today because the fish are biting so much we're going to see that anybody could come in with a big fish. We had a five an a-half pound bass come in and our biologist who's been here for most the derbies said it was the biggest he's ever seen. It was 20 inches long – it was a big fish.”

The prize for the largest bass is $2500. The top ten bass are also eligible for prize money.

In addition there are prizes for the top pike, perch, and crappie.

“Because it's our tenth year we also have ten tagged fish worth $100,” Pries explained.

The ten fish had small tags attached to them but at the end of Saturday's fishing, those bass managed not to get caught.

All the fish are released back into the lake after being caught.

There is a set of rules for the derby that all contestants must adhere too. Marshals patrolled the lake in boats just to make sure everyone was playing fairly. They also inspect all equipment before anglers head out just to make sure no one tries to bring in a ringer to claim some prize money.

For novice anglers, there was a kids category for those 11 years old and under and quite a few kids brought in some nice size fish for the weigh in.

The funds raised during the Bass Derby are channeled back into projects at Island Lake and in the past have included trail maintenance and the fishing docks that are located around the shore.