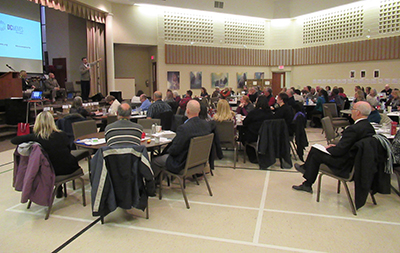 What does poverty look like to you? Who lives in poverty? Why? How do we combat it?

These were just some of the questions discussed at Dufferin County's first ever poverty reduction summit.

Held last Wednesday (Jan. 17) at New Hope Community Church, the summit saw over 70 human service providers, community members, along with several county councilors, as well as municipal, and provincial politicians attend to discuss ways to tackle poverty in the county.

Dufferin Warden Paul Mills thanked everyone in attendance. He said poverty in Dufferin differs from that found in urban places in Ontario, like Toronto.

“Poverty in Dufferin County looks more like families unable to heat their homes as a result of rising fuel costs, families often walking distances to utilize the services of food banks because their pay cheques cannot sustain their needs and transportation is limited.”

The Dufferin County Poverty Reduction Task Force (DCPRTF) provided a report for poverty in the county. In 2016, Dufferin spent $4.2-million on social assistance benefits, while projections for 2018 are currently at $4.7-million. One in 10 (approximately 6,000) people in Dufferin live in poverty.

John Oosterhof, a member of DCPRTF, and former Grand Valley mayor and warden of the county, went around to the different councils to bring attention to poverty and encouraging councilors to attend the summit.

He told the Citizen his main concern with poverty is that there isn't enough employment in the county for those to get out of their situation, and today's youth need to get a better education to “prepare them for life.”

He said poverty starts with the family, and unless something is done, it will continue into the next generation. “It's a continuous merry-go-round.”

Poverty in Ontario costs approximately $32- to 38-billion yearly, while Canada as a whole is between $72- and 84-billion per year. Poverty costs anywhere from $2,300 to 2,900 per Ontario household every year.

Kurtis Krepps, Ontario Works manager for Dufferin County, provided some statistics to the Citizen on the number of people living in poverty in each of the municipalities. He advised that they fluctuate monthly depending on applications and cases no longer eligible for Ontario Works Benefits.

As of December 2017, Orangeville and Shelburne have the highest number of people in poverty in the county, at 65 per cent and 17 per cent respectively. Amaranth is at four per cent, Grand Valley at six per cent, and Melanchthon at five per cent. Mulmur and Mono have the lowest numbers, the former at two per cent, and the latter at just one.

The summit had three panels that consisted of 11 panelists from the county, provincial, and federal levels speak on poverty, who's affected, reasons people live in poverty, and what is being done, and can be done, to combat it.

Mr. Krepps was part of the first panelists, and said they look at treating people as human beings, rather than numbers. “We look at it through a trauma lens and say ‘this individual's obviously experienced some trauma in their life, how can we support them through that?'”

He sees a need to break the stigma around poverty, in order to better understand and solve it. “You might see something that may look like it is poverty, it may not be. But we don't necessarily know who is in poverty, and that really talks to the stigma.”

Tim Smith, program manager of Canadian Mental Health Association, Dufferin branch, spoke during the second panel. He was part of the panel that looked at reasons why people are in poverty.

Mr. Smith tackled looking at defining mental health and poverty, with issues that impact health include income, education, work conditions, and socio-economic status, and as people jump from job to job, they don't gain confidence.

He said mental health impacts poverty, and vice-versa. “It's important to consider the intersection of mental health on poverty. There's not a direct correlation between mental health and poverty, but we know they impact each other.”

The third panel had members of social services in the county, including Choices Youth Shelter, the Orangeville Food Bank, and Family Transition Place.

She reiterated the challenges of stigma around poverty, and to remove those myths of who's in it and uses the food bank. “They look like us, because they are us. They are our neighbors, friends, and coworkers. It's much different than it used to be.”

Keith Palmer, Dufferin's director of community services, said he wasn't surprised with the numbers from the report, but, “seeing the different challenges collected in one document with strategies on how we can address those issues, was very comforting for me to see.”

He said singles, seniors and children deal with poverty the most, and they need to recognize those groups. “We have to be able to provide supports and services to those groups that prepare them better for the future. We need to create programs that address the needs of that community.”