Bears come from behind in first home game 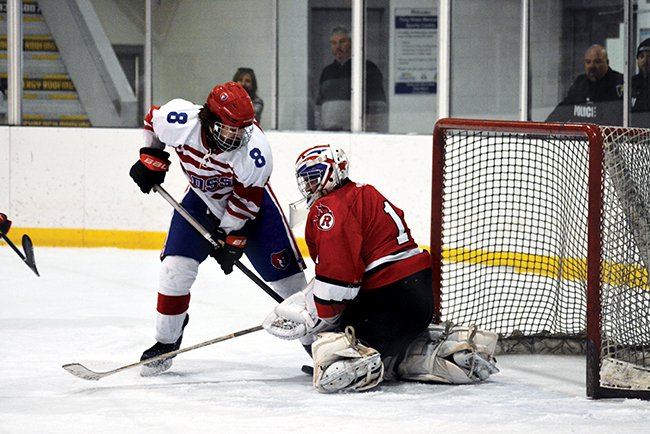 The team's only loss this season came when they played Norwell on Dec. 6, so the Bears were ready to even the score on home ice.

The ODDS team had plenty of opportunities in the second frame on good plays in front of the net and one break-away, but they were stopped by a hot Norwell goalie.

With one period left to play the Bears tied it up when Elgin Cook took the shot from the point in the frame that made its way to the back of the Norwell net,

With 6:59 left on the clock the Norwell team again went ahead by a goal to lead 3-2.

Waters stepped up and scored the tying goal less than a minute later making to make it an all out battle for the last six minutes of play to see which team could get the edge.

ODSS won the game when Liam Smith took the shot from the outside and off to the right of the net and found the mark in the Norwell goal to give the Bears the lead and the win.

“I thought this was our most complete game so far,” said coach Justin Davis of how the team performed as a unit. “We're a good team. Our issue right now is there's some weak teams in the league and we get a little confident with ourselves. Those guys (Norwell) beat us last week. They're a good team and they work hard so today we had to play a little more honest – and we did that.”

The squad is pretty diverse this year with several younger players stepping up to fill on the ODSS roster.

After this game the Bears have a 3-1 record and a fourth place in the District standings.

Centre Wellington is leading the pack with a 4-0 record followed by Norwell District and Erin District.

The Bears will go up against Centennial Collegiate on Thursday, December 21, in Guelph.

They return to Tony Rose arena for their next home game on Tuesday, January 16, to host Erin District High School.