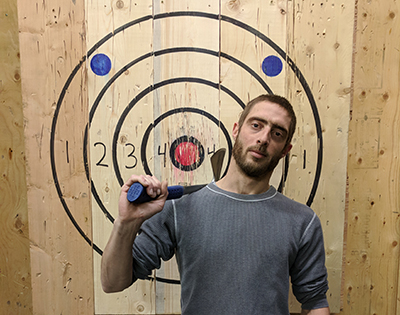 When Chris Morning first walked through the doors of Far Shot Recreation in Orangeville this past summer, he had no idea he was taking his first steps towards an unlikely world championship win.

On the lookout for something to do in town with his brother-in-law, Chris pitched up at Far Shot after learning of the facility's axe-throwing league. He was hooked after his first throw.

“When I found out axe-throwing was available in Orangeville, it just sounded like an awesome, manly, bad-ass thing to try out,” Chris remembers. “We went out that first time and did okay. We've stuck around ever since.”

Since opening in Orangeville a little over a year ago, Far Shot Recreation has provided a platform for local residents to “try something a little different,” says owner Benn MacDonald. Along with axe-throwing, the organization offers knife-throwing and various archery packages, including archery dodgeball.

Thanks to the efforts of Mr. Morning, the facility rose to worldwide prominence Wednesday of last week (Dec. 13) as the Orangeville local bested 32 individuals from four countries to win the inaugural World Axe Throwing League championship. Tasked with taking 50 consecutive shots over the course of an afternoon, Chris finished with a final score of 277 – three points ahead of his nearest competition to land the axe-throwing community's version of the Stanley Cup.

To briefly explain how an axe-throwing game works, it's something of a hybrid between darts and archery. Competitors must stand 12 to 15 feet away from the scoring board when throwing the axe, which must make no more than one rotation over the course of a shot. Depending where a shot lands, competitors can score 1, 2, 3 or 4 points. A bullseye shot gives 6 points, while a ‘kill shot', available with the final shot of a 10-round game, or ever five shots in the world championships', gives 10 points. In his world title win, Chris managed an incredible 40 bullseyes out of 50 shots.

“To say it was unexpected would be an understatement,” Chris said. “I've been pretty blown away by it all. Even to have the chance to compete in a world championship was pretty crazy. I threw my first axe probably in August and a few months later I'm among the top 32 ranked throwers in the world. It's been a crazy, amazing experience.”

While Chris admits to no real expectation of lifting the trophy heading into the competition, Benn says he always considered him something of a dark horse for the title having watched him win the fourth season of Orangeville's Axe Throwing League back in November.

“Chris has really good technique with his axe throwing and he's really improved the more he's practised. After his first 10 throws in the championships, I realized he had a real shot of winning. He was in third place and had thrown nine bullseyes. He kept that consistency up right the way through and ended up taking over first place in his last shot or two,” Benn recalls. “It's a massive accomplishment. I'm proud of Chris and very happy that he won the competition.”

The massive championship trophy is now on show at Far Shot Recreation, located at 10 Centennial Road. That will serve as the perfect motivation for other local throwers looking to usurp Chris as the fifth season of Orangeville's Axe Throwing League returns on Jan. 15. While he's looking forward to the local competition, a potential inter-promotional match-up with the National Axe Throwing Federation's champion could be on the horizon.

“I'll leave that up to Benn to sort out,” Chris laughs.

Following his incredible rise to success, Chris encourages anyone with an aptitude for having fun and letting loose to give axe throwing a try.

“Honestly, it's a ton of fun and if someone like me can go from beginner to world champion in just a few months, it shows that practice pays off,” Chris said. “We're sort of like a little family out at Far Shot, a great social community. I'd love to see a couple new people out for the new season in the new year.”