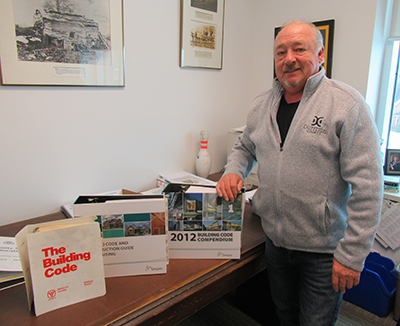 Mike Giles, Dufferin County's Chief Building Official, has retired after 30 years of working with the county, concluding an extensive and remarkable chapter in his life.

He worked in the county's building department for nearly 31 years, starting as a building inspector in April 1987, before assuming the role as chief building official in November the same year, and held the post for three decades. He attended some 350 council meetings, and issued over 16,000 building permits.

In an interview with the Citizen, Mr. Giles looked back on the changes and growth he's been part of throughout the county's history.

He said he's “seen a lot of interesting things … a lot of really good things” over the years, and recalled how the first building code he dealt with has “tripled in size and regulation” since he started. “Now everything is about air tightness, insulation values, low cost of heating, lighting, those types of things.”

Mr. Giles discussed some of the multi-million dollar projects he's overseen in his time. Several include the construction of two ambulance stations, including the Dufferin EMS Station in Orangeville, the $21-million Dufferin Oaks building in Shelburne, renovation of an old bowling alley into the $5-million Edelbrock Centre, and the county's courthouse expansion.

“Any building the county has done over the last 25 years, I've been directly involved.”

Discussing these builds, he mentioned that the ambulance one is “near and dear to my heart” because of its function in the community, while the bowling alley was “real hands on.”

The latest build Mr. Giles was involved with is the 24-unit social housing on Lawrence Avenue, beside the senior social housing at 40 Lawrence, which he said he is “very proud of,” because it's “the nicest social housing building in this province. It's gorgeous.”

Mr. Giles has seen the “aftermath” of three major tornadoes in the county during his time, including Grand Valley in 1985, Primrose in 1992, and Violet Hill in 1999, with Grand Valley being “without a question” the worst of them.

His most recent project is the hurricane clip rebate program, which has “got to be one of the best things I've done.”

These clips, which cost a dollar per clip, are small pieces of metal that are engineered to bind the roof rafters or trusses to the top of the wall, securely fastening both. Widely used in the United States, they prevent and reduce structural damage and costs during severe storms, along with the risk of injuries.

The county implemented the rebate program in 2016 in partnership with the Institute for Catastrophic Loss Reduction, where developers, building, and homeowners who install them during construction receive $4.50 per clip.

To date, the county has paid $33,500 in rebates to a total of 125 applicants, and the rebate program has received recognition across Canada.

Mr. Giles was honored at county council last week with a plaque for his retirement, and thanked the county for giving “me the opportunity to do things that I could not have imagined when I started this job.”