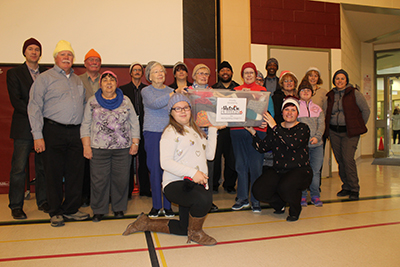 Sometimes it's the simplest ideas that can make the biggest difference. Those words echoed through the halls of Montgomery Village Public School (MVPS) last week as Stephany St. Louis, the driving force behind HatsOnDufferin, announced the local non-profit's inaugural campaign had assembled 2,900 winter hats so far in 2017.

The organization has taken the community by storm since its inception a year ago. Upon learning of the growing rate of poverty in Dufferin County, Ms. St. Louis had but one goal – to ensure that every child, person and family in our community has a hat to keep them warm this winter.

HatsOnDufferin hosted 12 hat-making events over a 10-month period and partnered with over 30 local businesses, organizations and municipalities, including the County of Dufferin, Headwaters Communities in Action and Chartwell Montgomery Retirement Residence. Representatives of those organizations were in attendance this past Friday (Nov. 17) as Ms. St. Louis officially dropped off 100 homemade hats to MVPS.

“It's an honour to be here today as a part of this wonderful initiative,” said Keith Palmer, Dufferin's Director of Community Services. “When Stephany first approached us with this idea of HatsOnDufferin we knew right away that this was something that would make a difference. It was an absolute no-brainer for us to support this program.”

And while Stephany, along with “trusty sidekick” daughter Amy, were the ones to get this initiative off the ground, it was the greater community at large that contributed to the success of HatsOnDufferin. Recognition at the 2017 Dufferin Board of Trade Business Excellence Awards and the 2017 Orangeville Arts and Culture Awards served as a testament to that contribution, says Stephany.

According to reports, one in 10 residents of Dufferin County are currently living in poverty. Once she learned of the shocking statistics, Stephany knew she had to do something to help the situation. Looking back to when she launched HatsOnDufferin, she couldn't bring herself to think of the youth across the community left to brave our harsh winter weather without at least some form of armour.

“HatsOnDufferin set out with one clear goal in mind for this inaugural campaign – we wanted to ensure that no child in Dufferin was left without a hat to keep warm this winter. I am so proud to be able to say that we achieved this goal,” Stephany said. “The extent of the generosity, dedication and commitment of so many community players is truly awe-inspiring. Our goal would simply not have been possible without this support.”

What began as a social gathering of individuals with a passion for the craft of crocheting, quickly evolved into a socially responsible community-minded initiative. Stephany believes that an increased awareness of poverty issues across Dufferin will help spur and support other community-minded poverty reduction initiatives.

“The winters in Dufferin may be cold, but the hearts, hands and generosity of our residents will always be warmer,” she wrote in a release to media.

All 2,900 hats have now been distributed to Dufferin's 29 elementary and high schools. With the 2017 campaign now over, Stephany and all of her volunteers are already looking forward to next year's initiative, which will launch in January. Hat making will continue and all current drop-off locations will remain open for donations.