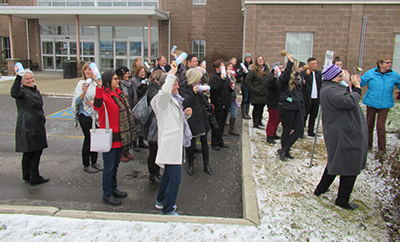 November 20 is Transgender Day of Remembrance to memorialize and commemorate those who have been murdered because of transphobia, and to draw attention to the continued violence and discrimination against transgender people.

The Orangeville event saw various members from FTP and DCAFS, Dufferin County's LGBTQ youth group, as well as individuals in the community, coming together to commemorate the day. There was a moment of noise to break the silence and raise awareness, with the transgender flag being raised at half-mast outside DCAFS office.

Myles Glazier, a volunteer with the county's LGBTQ youth group, and a transgender male, spoke to those in attendance, describing how he started transitioning two years ago and has “never looked back.”

He says he is proud of his transition, and although it was “one of the hardest experiences to ever go through,” it was also “the most rewarding, to finally be comfortable in my own skin.”

Mr. Glazier, 24, said this was his first day participating in trans day, and although he tries to live as normal of a life as he can, “it's been difficult for sure.”

Jennifer Moore, DCAFS executive director, thanked everyone for attending, for taking steps to make a difference in the county, and help “pave the way forward, and bring awareness to this really important issue.”

She spoke on how violence and suicide is higher for transgender people, “which is just not okay.”

Samantha Turner, a clinical counsellor at FTP, helping in child therapy for individuals experiencing abuse, also spoke at the event.

She says although there has been great change, “we have a lot to do as a society,” as voices for transgender people are “dismissed, even silenced and ignored, by not just individuals, but by communities and societal structures.”

Ms. Turner says transphobia is still a “pervasive issue.” Many don't speak out on violence or discrimination they face, and those who do report it “often face additional barriers, or maybe face additional violence.”

She explained that in an Ontario survey with transgender people, 77 per cent considered suicide, 45 per cent attempted it, while 50 per cent live in fear everyday.

Ms. Moore says they want to bring awareness that transgender people are human, and deserve the same rights as everyone else.

“We do have a lot of transgender individuals in our community just like every other community,” she says, “but there's not a lot of attention drawn to it.”

Mr. Glazier says educating people has become more frequent and better, saying he did not fully understand what trans was when be began his transition. “It's not become easy by any means, but I think it's become easier and easier to come out earlier or feel more comfortable coming out.”

“A lot of people like to think it's not happening, because it's easier to deny it, or it's not their experience so that doesn't make it real … it's important for us to also acknowledge how it's happening.”

She adds it's a great opportunity for FTP and herself to be part of this ceremony. “It's helpful to be able to show our support as a community agency for individuals as well.”

Ms. Moore described the LGBTQ youth group being run for many years as being a “life saver for a lot of kids,” and they manage on their own, as the government does not fund it.

She says that discrimination happens anywhere, and has heard many stories of youths facing discrimination, and is very difficult for them as they are already in a vulnerable place in life. “While some kids are lucky enough to have families who are supportive of them, many are not.”

Mr. Glazier says this commemoration is a big step forward for trans people in the area, and says that although he hasn't had any issues of facing discrimination, he's heard the youths' struggles. “Hopefully this helps in spreading the word and educating people.”